Hello everybody! My friends over at Body Jungle were nice enough to ship me out some things to review this week, so the A:Muse by Lifestyles will be the first of two reviews sponsored by them. Body Jungle is a fairly new shop. What's their forte you ask? They have EVERYTHING! They have more products on their site than most shops I review for combined. So if you're looking for something but can't find it, I highly recommend hopping over there to see what they have.

I added the A:muse to the list of products I wouldn't mind trying for a few reasons. First off I saw that someone was asking about it on Tumblr, which initially got me thinking about it. Secondly, I am for some reason very interested in trying toys made by condom companies. I feel like they should know what they're doing if anyone does!

The A:Muse by Lifestyles comes in a fairly compact purple box. When I first pulled it out I was surprised by how classy it looked compared to a lot of other toys. It's very feminine and at a glance no one would know that it's packaging for a toy. It's entirely purple, black, and white.

The front has a small flap that you can open to see the toy and read some more information about the features. Unless you get curious and open the flap you can't see the toy, which also makes it more discreet. It tells you how to control it and a bit about the settings.

When you flip the box over to the back there's quite a bit more information, especially concerning the materials and design of the toy. It's informative enough that you certainly know what you're going into, and it feels very high quality for the price range. Here's a picture of the front, flap open, and back: 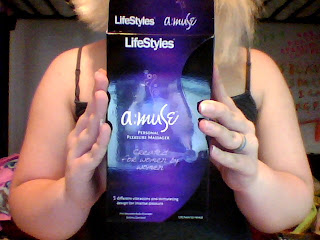 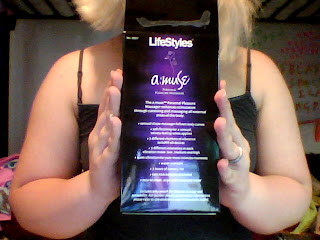 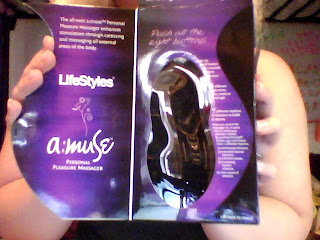 The A:muse itself feels very quality when you first take it out of the box. Made of smooth plastic, this toy is both nonporous and body safe. This means it isn't going to seep out any ucky chemicals and that you can fully disinfect it. It's also very firm, which means you have more control of the pressure you put behind the toy.

It's about 5 inches long and 4 inches wide at the largest point. It's also about 3 inches thick at the thickest point, so it's not as easy to hide or take with you as a more traditional bullet. On the other hand, it's also a lot more ergonomic than a bullet, and it's much easier to control.

Here's a picture of the A:muse VS a pen 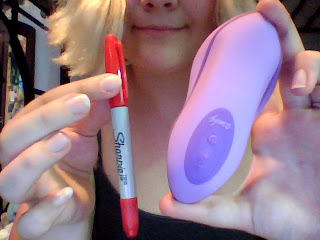 The area that has the strongest vibrations in it is the tip by the control pad. This tip also has a bit more of a point to it for better pinpoint stimulation. The vibrations are about halfway between buzzy and rumbly, and on high I would rate it about 2.5 vrooms and 2.5 bees.

It's not going to be strong enough for people who really need a lot of power, and this is one of the few toys I have that I wish had a bit of a higher setting. It's also not going to be heard over the shower or through the wall, though you can't use it in the same room as someone else.

You control this toy by pressing the three buttons on the dark purple control pad. There is a power button, an up button, and a down button. They're all way to press, but I haven't had any issues with accidentally pressing them in use. Here's a picture of the buttons: 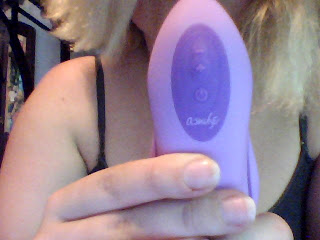 There are three intensity settings to the A:muse and there are 5 different pattern. This means that there's a total of 15 different combinations that you can play around with, something that I would appreciate a bit more if it was stronger. The five settings are as follows:

Another thing I want to mention is that it's REALLY hard to open the battery compartment if you follow the instructions. It says that you should squeeze the sides and pull up a little to open it, but in reality you just need to get your fingernail under the top part and yank. I squeezed and squeezed, and it's much easier just to pull. Here's a picture of the toy open: 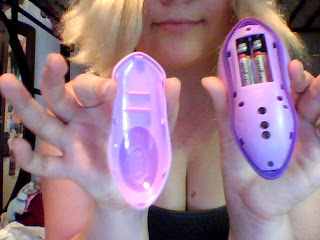 The A:muse also comes with a sleek travel bag. It's great because it keeps it clean and safe, though there's not much room in the bag if you want to pack lube or spare batteries. Here's a picture of the A:muse VS the carrying bag: 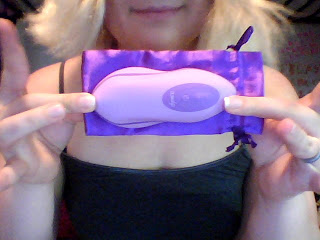 Overall, the A:muse is an ergonomic toy that has a lot going for it. It has a ton of patterns, it feels quality, it comes with it's own bag, and it's waterproof. On the other hand, I usually use toys on their lowest setting and I had to crank this one up to high, so if you need much power at all this one isn't a good place to look.

I had a really hard time rating the A:muse, but I settled with a 3.5 because it's awesome in concept, but I just feel that if you have a current favorite, even if you don't like a lot of power, this isn't going to replace it.

You can find the A:muse over at Body Jungle by following this link right here. If you're not big on external stimulation or you want something with more power, Body Jungle is sure to stock something that's more up your alley so you should still check them out!